Curators-Read this Year, an International List of Titles, where Classics Prevailed

Before July, Curtain proposes a list of recommended summer readings, from fiction, to classics, to classics on curating. This list was compiled from the readings made this year by some of the curators featured in Curtain. Essentially, we wanted to have it as a handy note for curators-reviewed reading inspirations.

Curating 101.
anything by Hans Ulrich Obrist
Swiss art curator, critic and art historian Hans Ulrich Obrist remains one of the star-curators of reference in the field. Point in case, his presence in so many Instagram Live during the confinement period, always eager yet composed, to deliver rigorous art recollections as well as exaltations about something that just happened. In our interviews, we found out that Ricky Francisco was reading “Ways of Curating”, a kind of memoir of Obrist’s career so far, enjoyable for it mixes insightful arguments and early days with understandings of the art world’s pace; and the contested “The Age of Earthquakes: A Guide to the Extreme Present” by Douglas Coupland, Hans-Ulrich Obrist, and Shumon Basar, on the influence of technology on culture (contested for its guiding claims).

We would like to add another reference, conversational and intimate despite its grandiloquent title, which is the delicious “A Brief History of Curating”. It is an easy-read about the American avant-garde, through a series of candid interviews with artists and curators, who reminisce their débuts of getting into (conceptual) art. Obrist recorded the life stories behind the movement, such as when writer and curator Lucy Lippard confides that it was Sol Lewitt, just an employee at the museum, like her at the time, who got her into French nouveaux romans by sharing the books he took from the public library across the road. Touching and insightful.

Historical Political Fiction. Italy. (To read, or reread, on Sicilian hot sand, like Luigi Fassi did)
“The Gattopardo” (The Leopard) by Tomasi Di Lampedusa, widely considered as a masterpiece of Italian literature, it depicts the changes happening to a Sicilian family, and society in Sicily at large, during the Risorgimento. It is also a masterpiece to watch (or watch again): Visconti’s 1963 movie with Burt Lancaster, Claudia Cardinale, and Alain Delon.

(Slightly Spooky) Fiction. England. (For if you want to feel haunted)
Sarah Waters’s “The Little Stranger“
This novel is set in 1947, in the English aftermath of the second world war, around a local country doctor and a family living in a declining Georgian house. It was written by London-based multi-awarded Welsh author Sarah Waters (b.1966), it was shortlisted for the Man Booker Prize in 2009, and it was made into a motion picture in 2018.
(read by Louis Ho, for his eerie description of the book here)

Queer Studies. Hong Kong. (As recommended by Brian Curtin, and/or if you are in need of a discussion-starter with him. Or if you like stories of people and history.)
“Oral Histories of Older Gay Men in Hong Kong” by Travis S. K. Kong. In his book, Travis S. K.Kong, who is an associate Professor in the Department of Sociology at the University of Hong Kong, addresses a gap in the “neglected and taboo area” of sexuality research—as described by the author himself—that is, the stories of older Chinese gay men. This lead him to talk and write twelve life stories, in a book that mixes “academic analysis with autobiography”, based on a series of interviews with Chinese gay men born between 1924 and 1952, and who never had the opportunity to share their stories. The first accounts starts like this:
“Born in mainland China in 1924, Old Chan was 86 when we first interviewed him in 2010 at his apartment in Shatin. He lives on his own in a public housing estate. He came to Hong Kong when he was six and he vividly remembers what Hong Kong was like during the Second Sino-Japanese War (1937-1945).” It then goes on setting the scene of Old Chan’s life, who earned a living as a delivery runner for movie reels. We learn that it was common back then for theatres to share the same roll of film (and so runners were passing the rolls between theatres, aligned with the various screening times). The historical perspective, paired with how these men lived their sexuality, as well as the writer’s kind bias, makes this an interesting read for it being an academic exercise. It is notable that Kong’s research, and his consequent book, also led to discussions within the various communities touched by the stories in the book, through seminars, book talks, interviews, and exhibitions, and ultimately resulted in the creation of a self-help group for older gay men in Hong Kong called Gay & Grey.

Fiction. Russia. It has its own pond for key scene in Moscow, a pond where Snejana Krasteva walks her dog. It is also one of her favourite books).
“The Master and Margarita” by Mikhail Bulgakov, was written in the Soviet Union between 1928 and 1940 during Stalin’s regime, published posthumously, and it is described as one of the twentieth century literary masterpieces. In it, shifting narratives in time and space give way to the surreal apparitions of the devil in the lives of an unpublished author and his muse, Pontius Pilate, performers, Moscow society under Staline, all wrapped in dark but funny humour, political satire, and poetry. Bulgakov worked on the novel for ten years, and while a censored version was published twenty years after his death, an uncensored one was circulating illegally, and would only be published in 1973. The novel is surreal, funny, and profound, where Bulgakov’s life lessons, as a frustrated artist whose work—and life—were under constant scrutiny, are shaped by more than one twisted turn.

Fiction. Brazil. Short Philosophical Tale. (Coimbra Biennal was based on it).
“The Third Bank Of The River” by João Guimarães Rosa. One of Guimarães Rosa’s best known tales, it is a story where a son is trying to understand his father’s decision to go live in the middle of the river that runs by their house. The central conflict of the story and the elegant simplicity of this fable, are perhaps some of the factors that pushed curator Agnaldo Farias to develop with his co-curators, Lígia Afonso, and Nuno de Brito Rocha, a whole biennial programme based on dicussions and multiple readings of this short novel. A simple tale of profound resonance, one of which was a large-scale exhibition.

Climate Fiction. Taiwan. (If you want to be teleported to the writer’s hinterland, as told by Zian Chen).
“The Man with the Compound Eyes”, by Wu Ming-Yi, a politically conscious fantastical novel, that was released in English in 2013 (originally in traditional chinese). It is a story with multiple plot lines developing throught the book, but that depart from a Taiwanese aboriginal boy and an academic, the sea, aboriginal legends, a gigantic trash vortex, and a lot of humanity.  Wu Ming-Yi is a multidisciplinary Taiwanese artist and author, he has been teaching literature and creative writing at National Dong Hwa University since 2000, and is now a professor in the Department of Chinese. This is the first of his books to be translated into English. Enjoy!

How To Listen To The World? An Inspiring Curator’s Practice 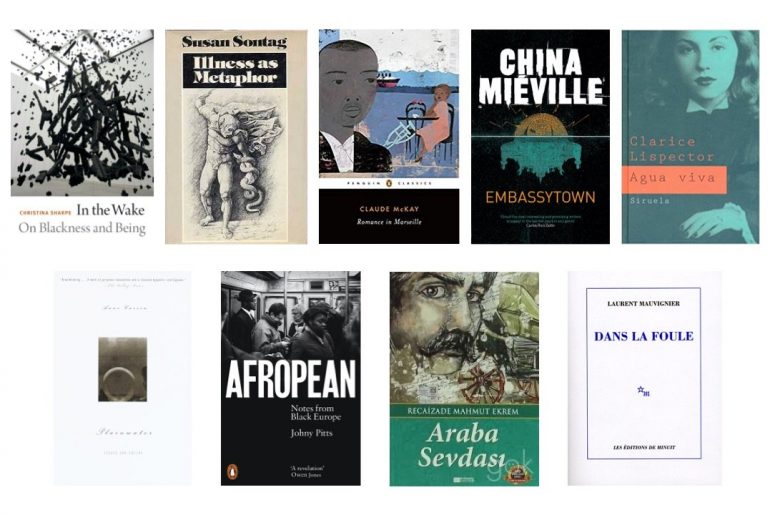 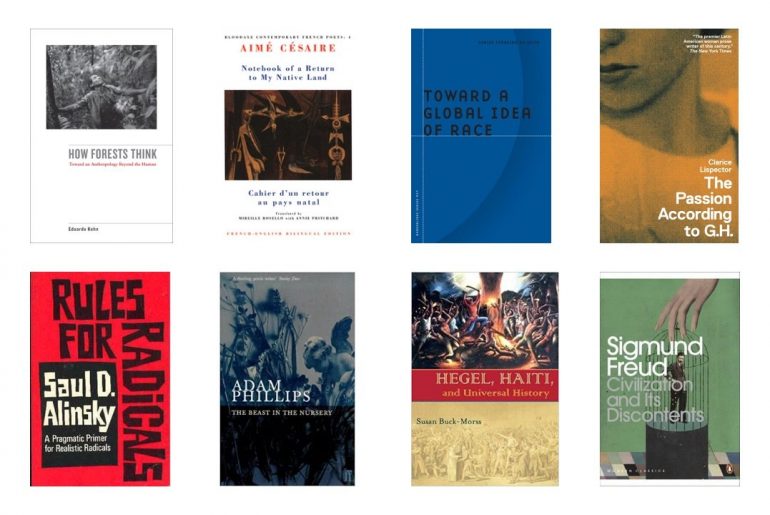 Books (and video) for Times of Social Struggle

We use cookies to ensure that we give you the best experience on our website. If you continue to use this site we will assume that you are happy with it.Ok